Enquire about this piece

What does POA stand for?

With some of our pieces, we prefer not to openly publish our asking price. We absolutely welcome visitors to the website to contact us to enquire about the cost of such pieces.

We just prefer to have a conversation to allow us to explain the pricing as well as to talk in more detail about the piece in question.

It doesn’t necessarily mean that it is a super expensive piece but it may just be that there is something unique or special that we would like to be able to tell you about in more detail.

A fine quality, Japanese Shodana (cabinet) dating from the reign of Emperor Meiji. The piece is lacquered and inlaid in Shibayama style with scenes relating to the “Boys Festival” along with Noble men playing board games, a dancing Shojo, musicians and objects of virtue. Ten dragons, (with mother of pearl claws and are intricately carved into the wood work.

You can take a tour of this extraordinary piece by watching the video below: 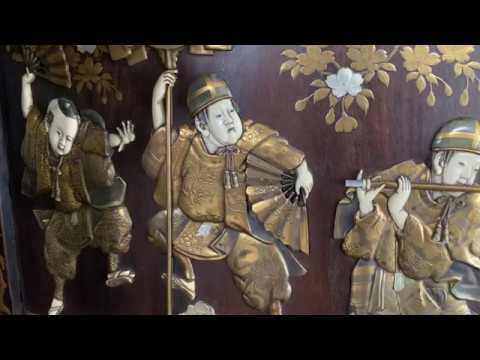 A Shojo is a Japanese sea spirit with red hair and a love of alcohol, Shojo are usually jovial friendly characters who enjoy dancing.
In Japanese several red plants and animals have the word Shojo, as part of their names including the Orangutan and the acer tree.

Shibayama is a style of complex high inlay decoration in mother of pearl, ivory, shell, coral, horn and wood. Shibayama was the name of the workshop to popularize this style.