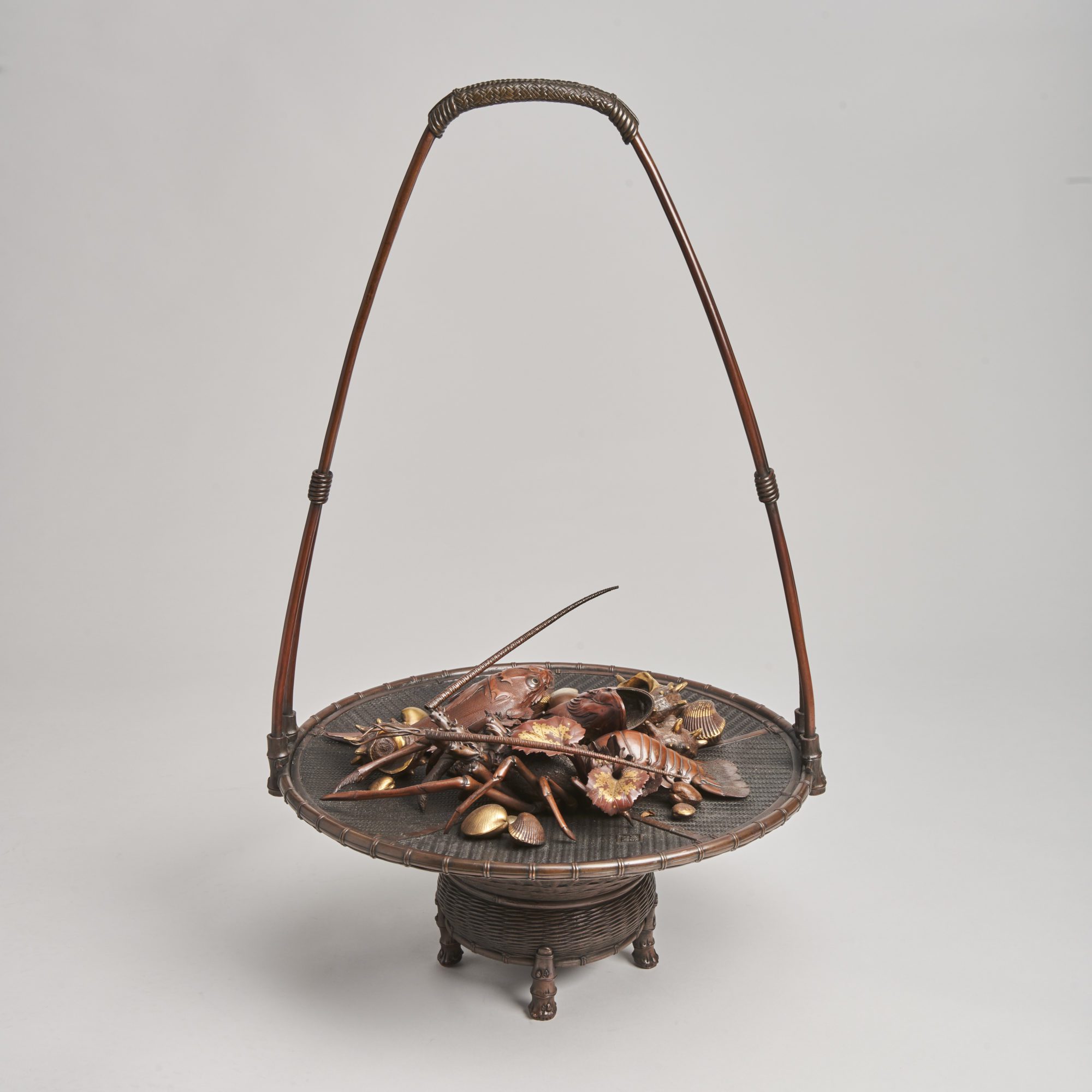 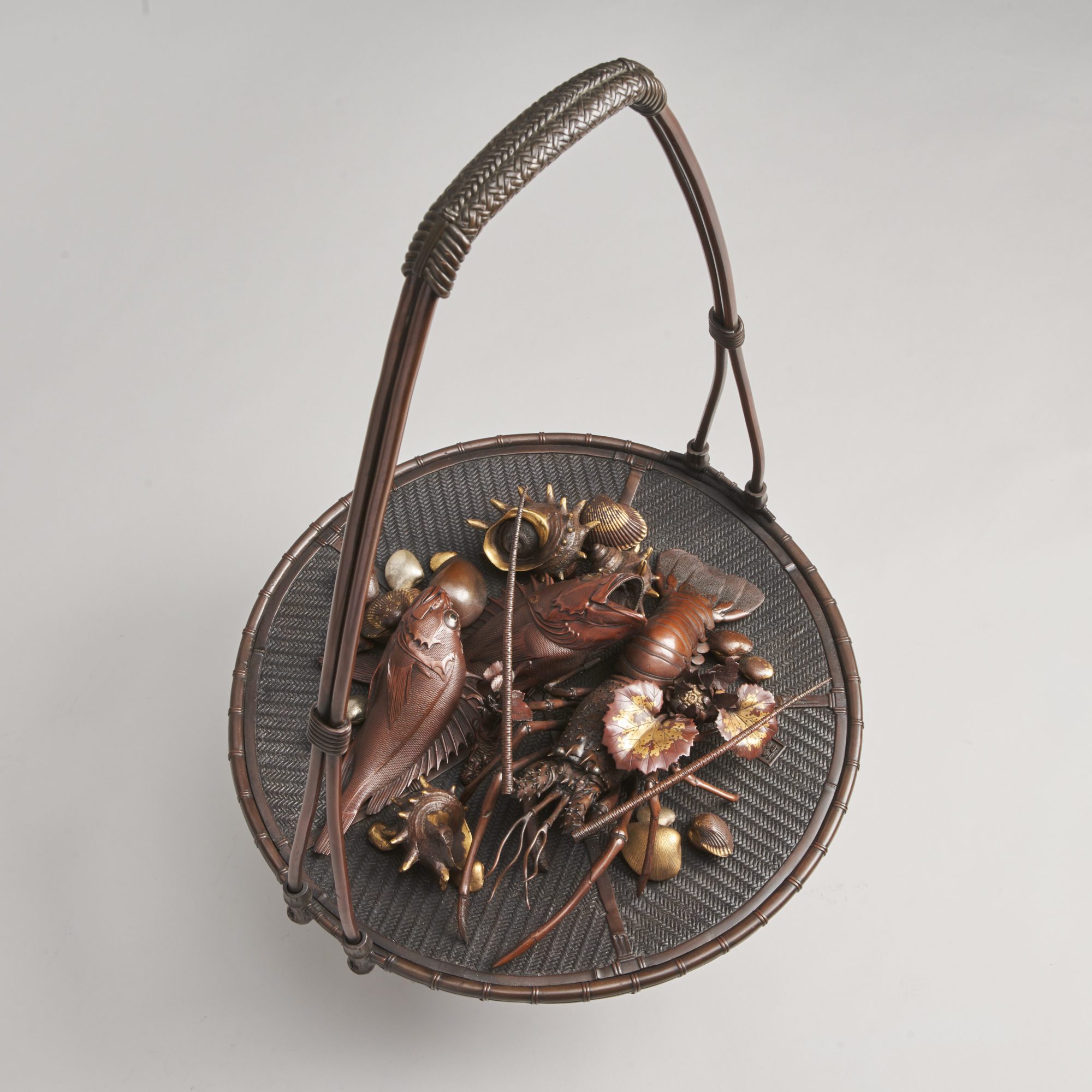 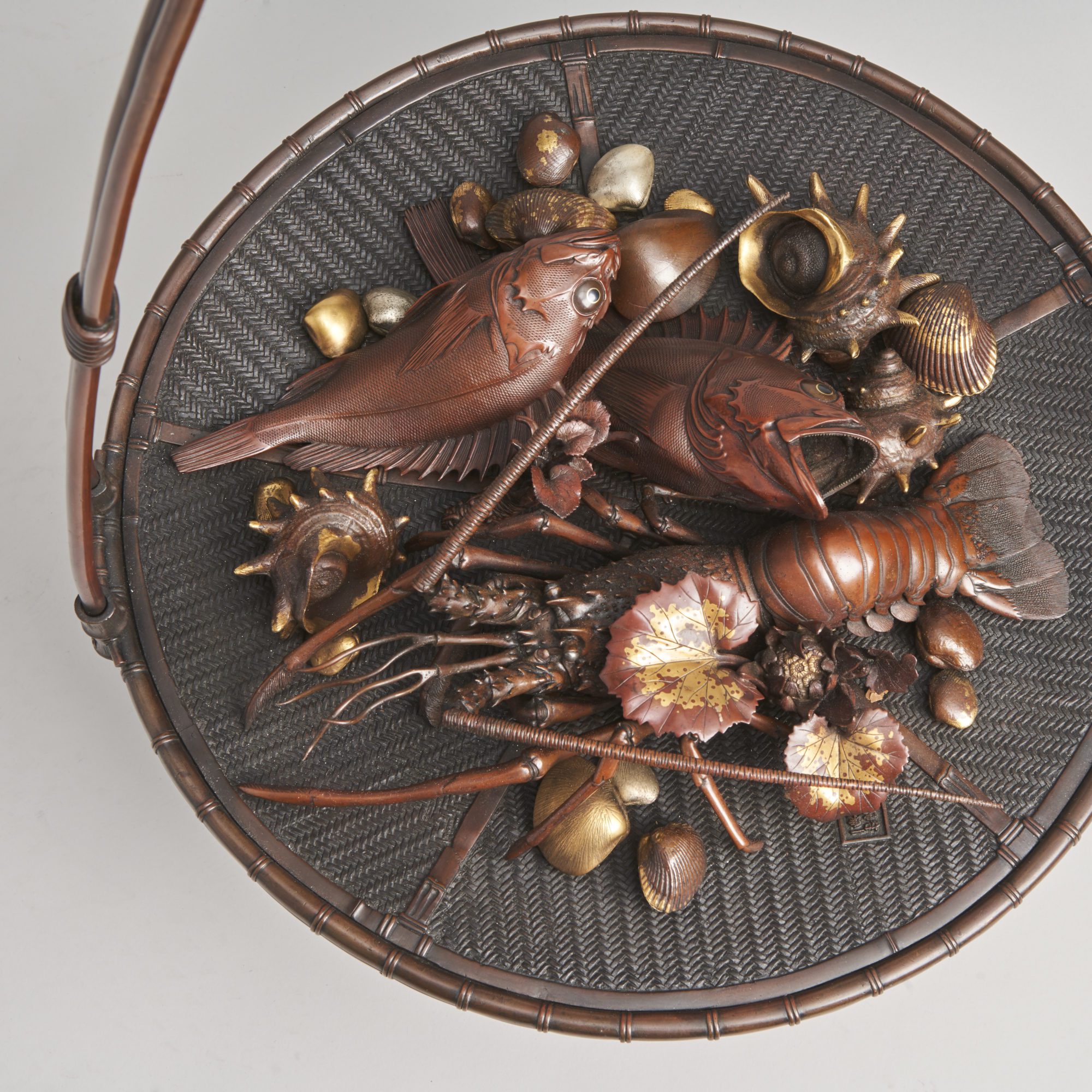 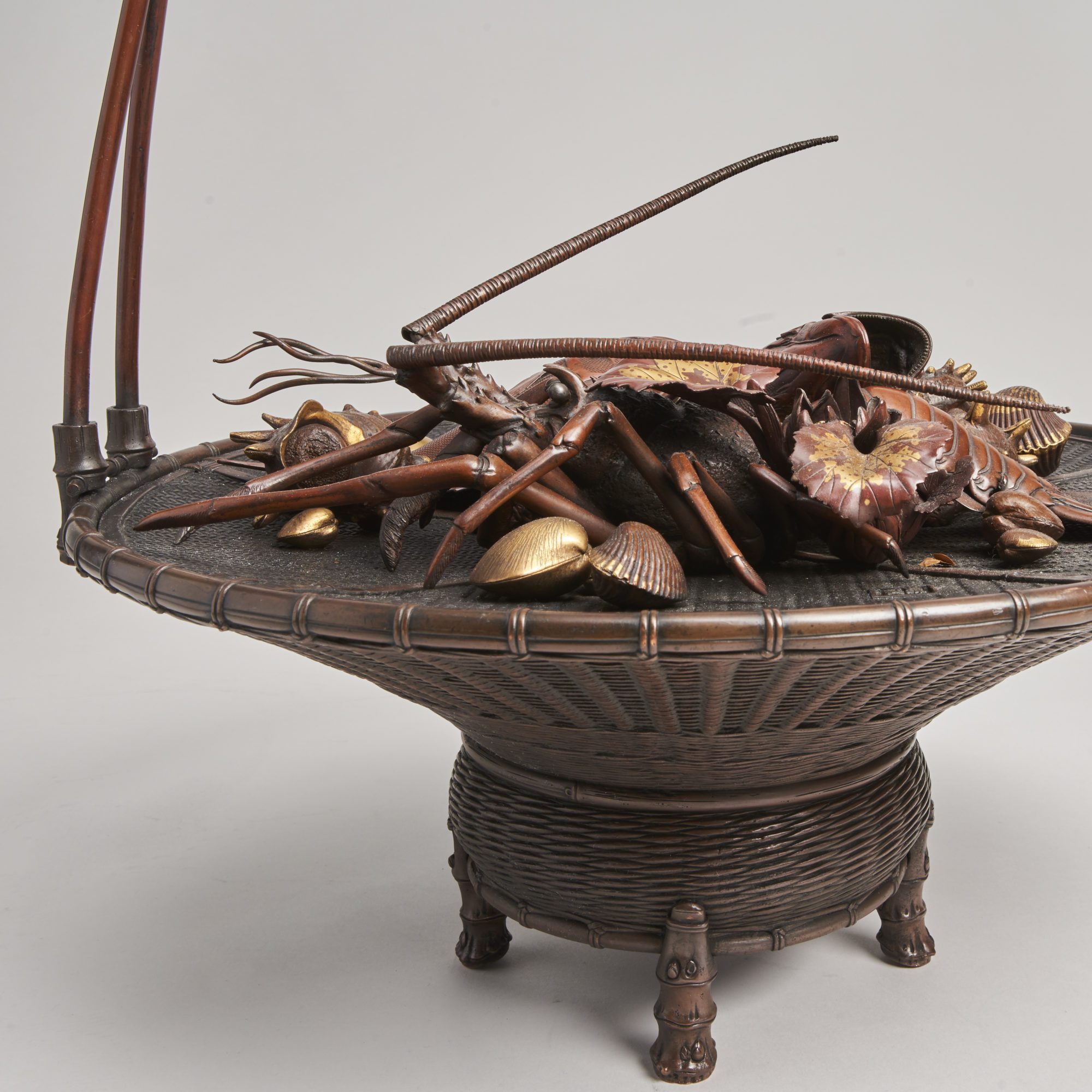 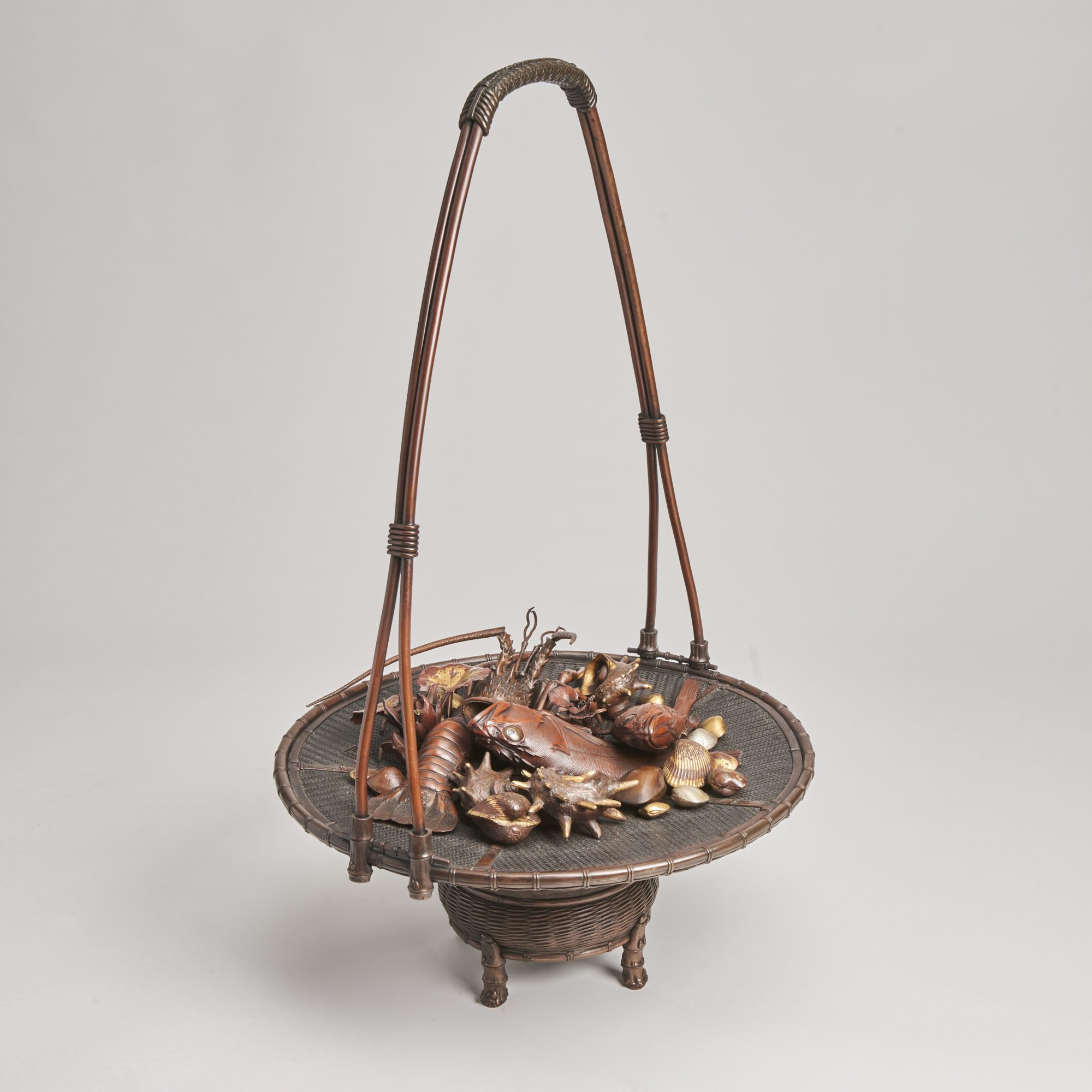 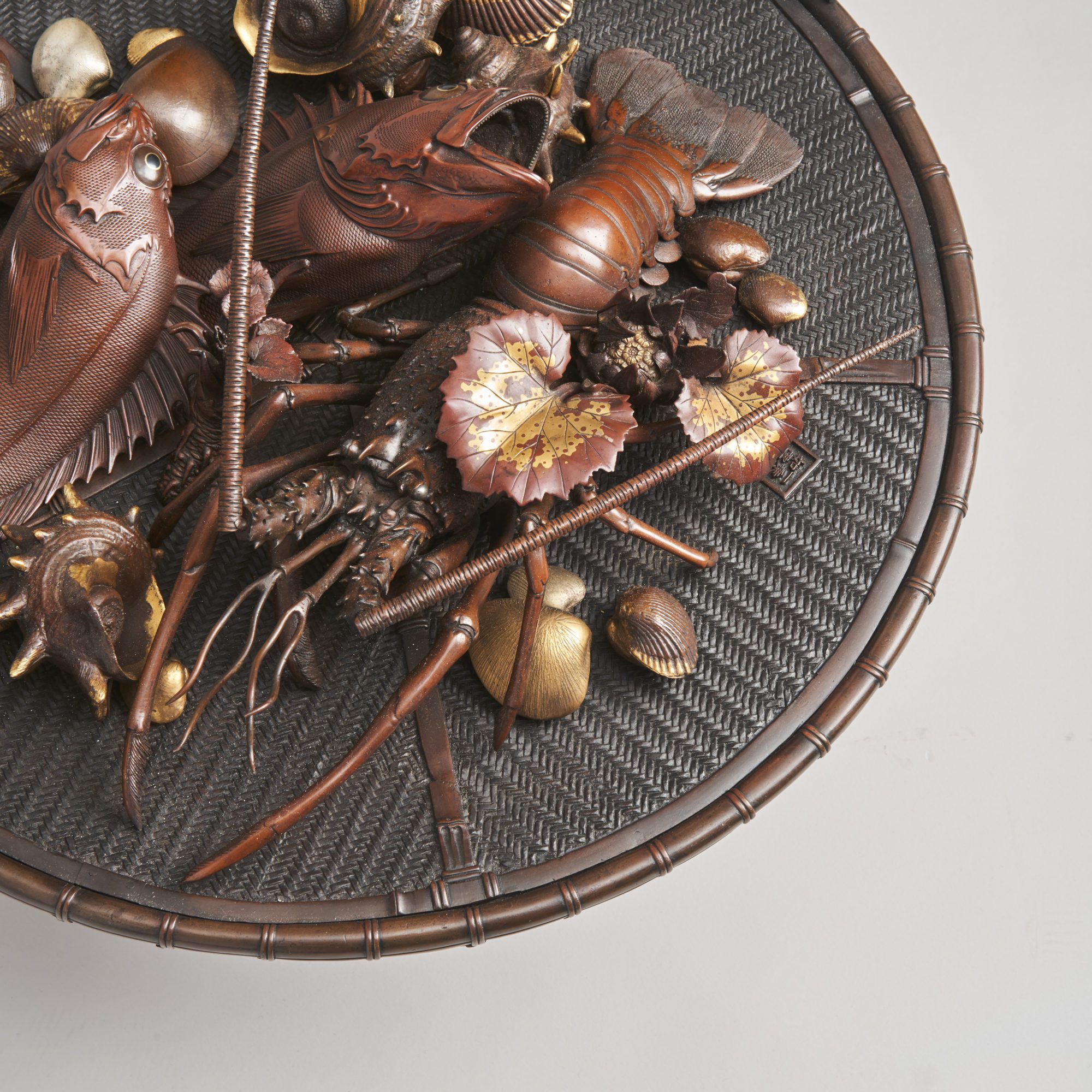 Signed Oshima Joun, this elaborate bronze and multi-metal basket of seafood is a tour de force of Japanese craftsmanship. Depicting a cornucopia of fresh seafood on a hand woven bronze basket, it showcases many of the metalwork techniques refined and perfected during the Meiji period (1868-1912).

The basket is signed with a seal which reads, Ichijoken Joun with kao.

Seafood
Being an island nation, seafood has always been a huge part of the traditional Japanese diet known as Washoku. The Japanese seldom ate red meat until about 100 years ago when Western cultures influenced the diet and tastes began to change. Seafood is still prevalent in the Japanese diet and this has been attributed to Japan having the best life expectancy in the world.

Spiny Lobster
The Japanese spiny lobster is a poplar high class food in Asia. It is found in the Pacific Ocean and is farmed commercially. It grows to about 30cm and can live for 20 years making it a symbol of longevity.

Horned Turban Shell
Highly prized in Japan, when prepared as sushi the horned turban shell is known as Saze. It is found in the shallow coastal waters off Honshu, Kyushu and Okinawa. They are such a delicacy in Japan that they are now farmed and released into the ocean.

Japanese Snapper
Also known as Tai, sea bream or Madai the Japanese snapper is an incredibly important fish in Japan, and as such if often depicted in art. There is a festival in Toyohama in Hiroshima dedicated to the fish, it includes 18 meter long fish floats and is the origin       of the famous fished shaped taiyaki waffle desert.

Asari
Also known as Maila clams or Japanese littleneck clams, these are a versatile food common in Japanese cuisine. They are admired for the variation in shell pattern and colour, no two are the same.

Wasabi Root and Flower
One of the most famous flavours of Japan, there are records of wasabi being used in Japanese food and as a drug as far back as the 10th century, it was highly valued and could also be used to pay taxes. It grows in the cold north facing mountain streams of Japan and is slow growing, it can only be harvested after 2-4 years when it has attained reasonable size.

Ichijoken being the artist name of Oshima Joun (1858-1940). Born into the family trade of metalworking, along with his brother Oshima Yasutaro (also a skilled artist), Joun became head of the business in 1877. He was a highly skilled bronze caster and by 1879 he had built up the business to include 11 assistants and apprentices all working under him in the studio. He exhibited at the 2nd National Industrial Exposition in 1881 as well as the Paris Exposition in 1900 and the Japan-British Exposition in 1910.

The majority of his work was sold through high level commissioning houses such as Sanseisha, Murakami Heishichi and Honda. Joun was a highly regarded professor at the Tokyo School of Fine Art from 1887 to 1932. Here he passed on his remarkable skills to many students including Eisuke Jomi, Sessei Okazaki, and Suzuki Chokichi 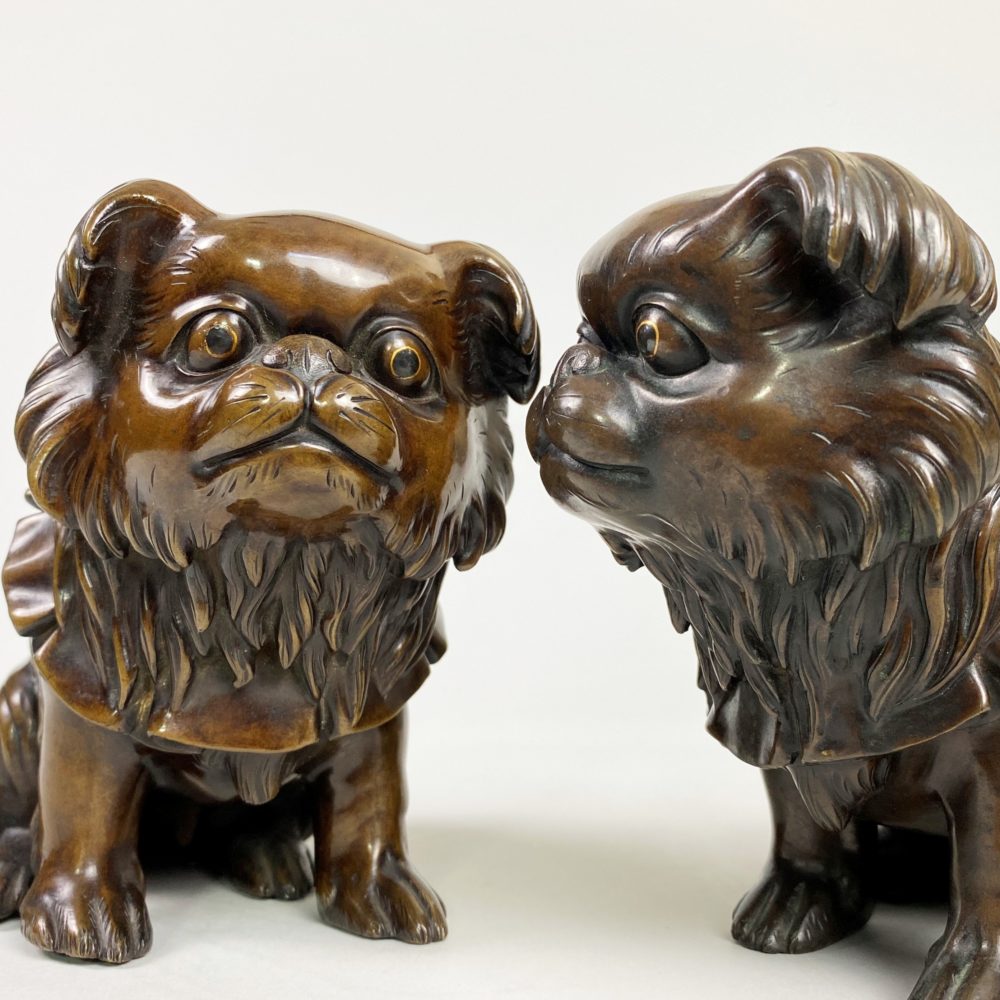 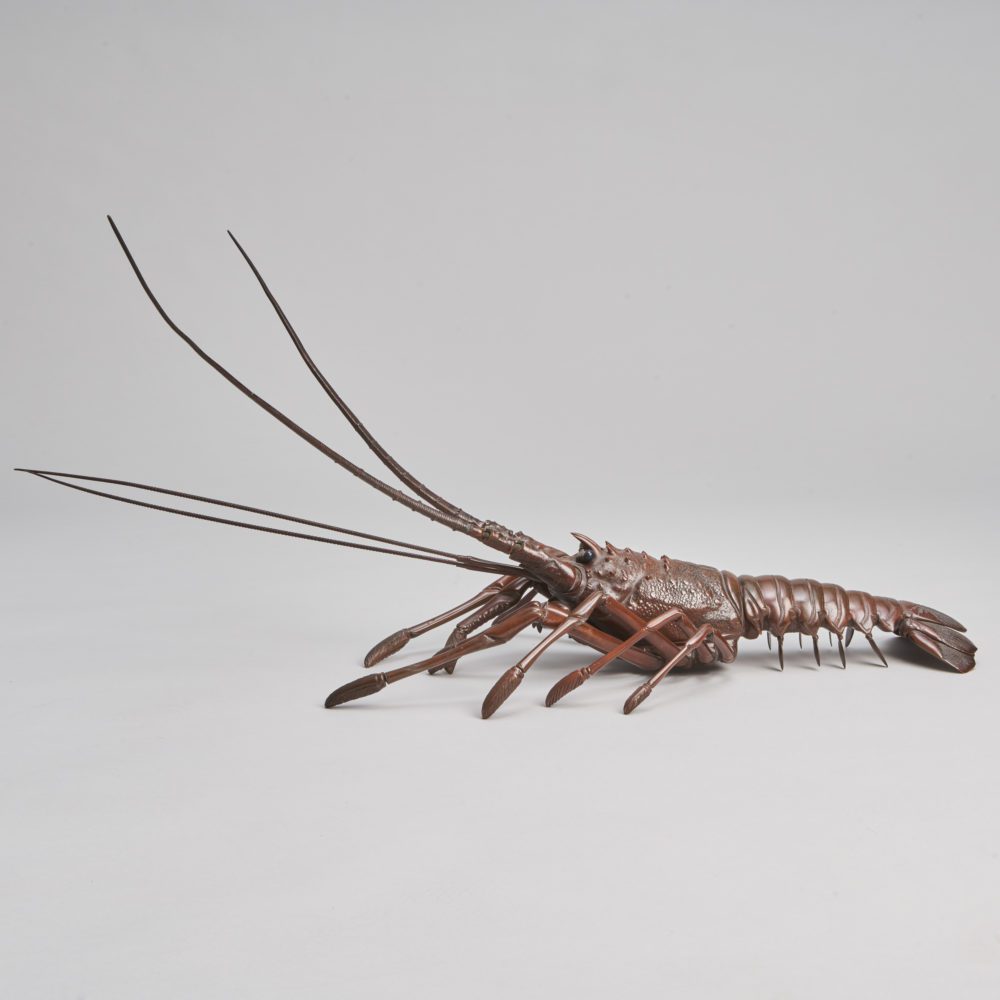