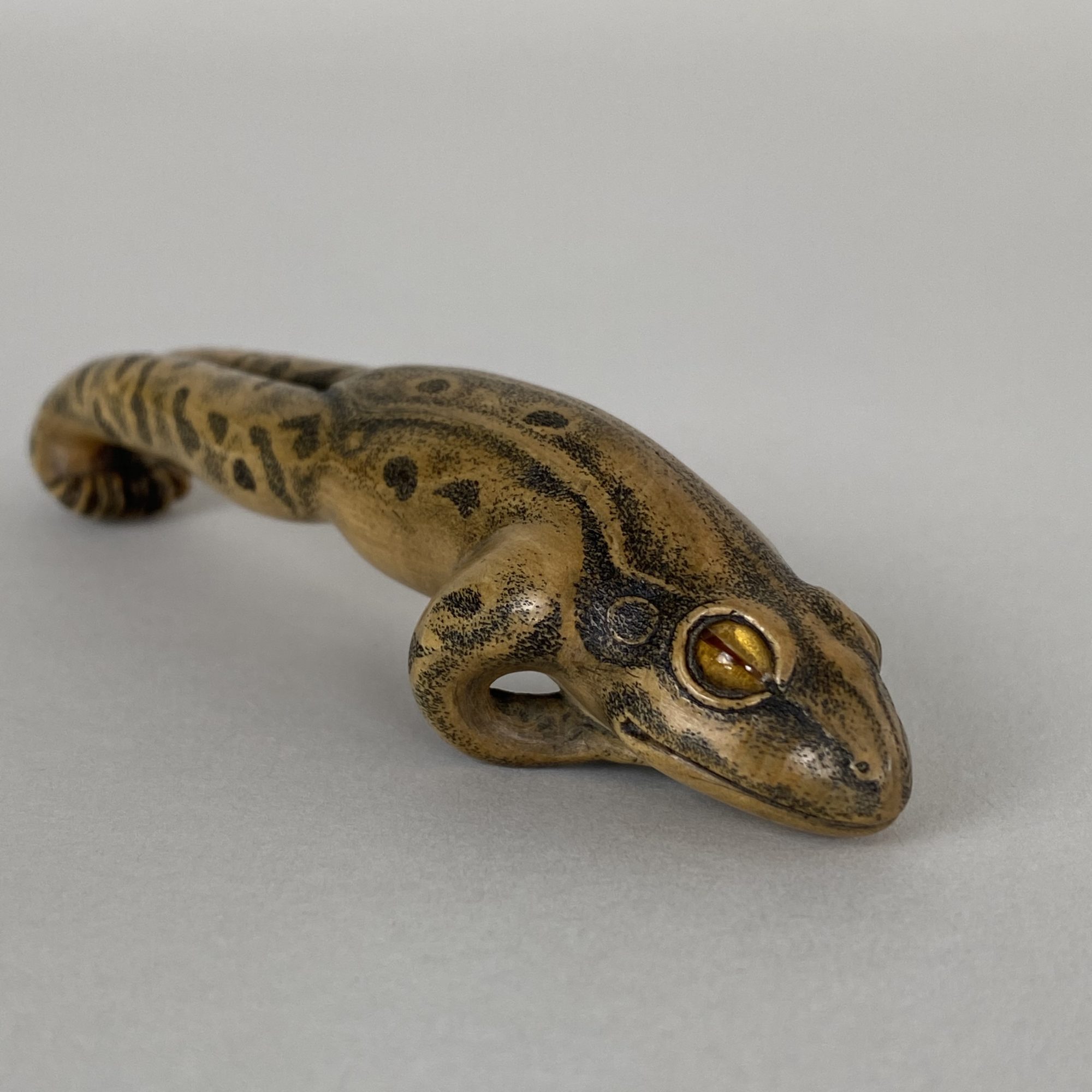 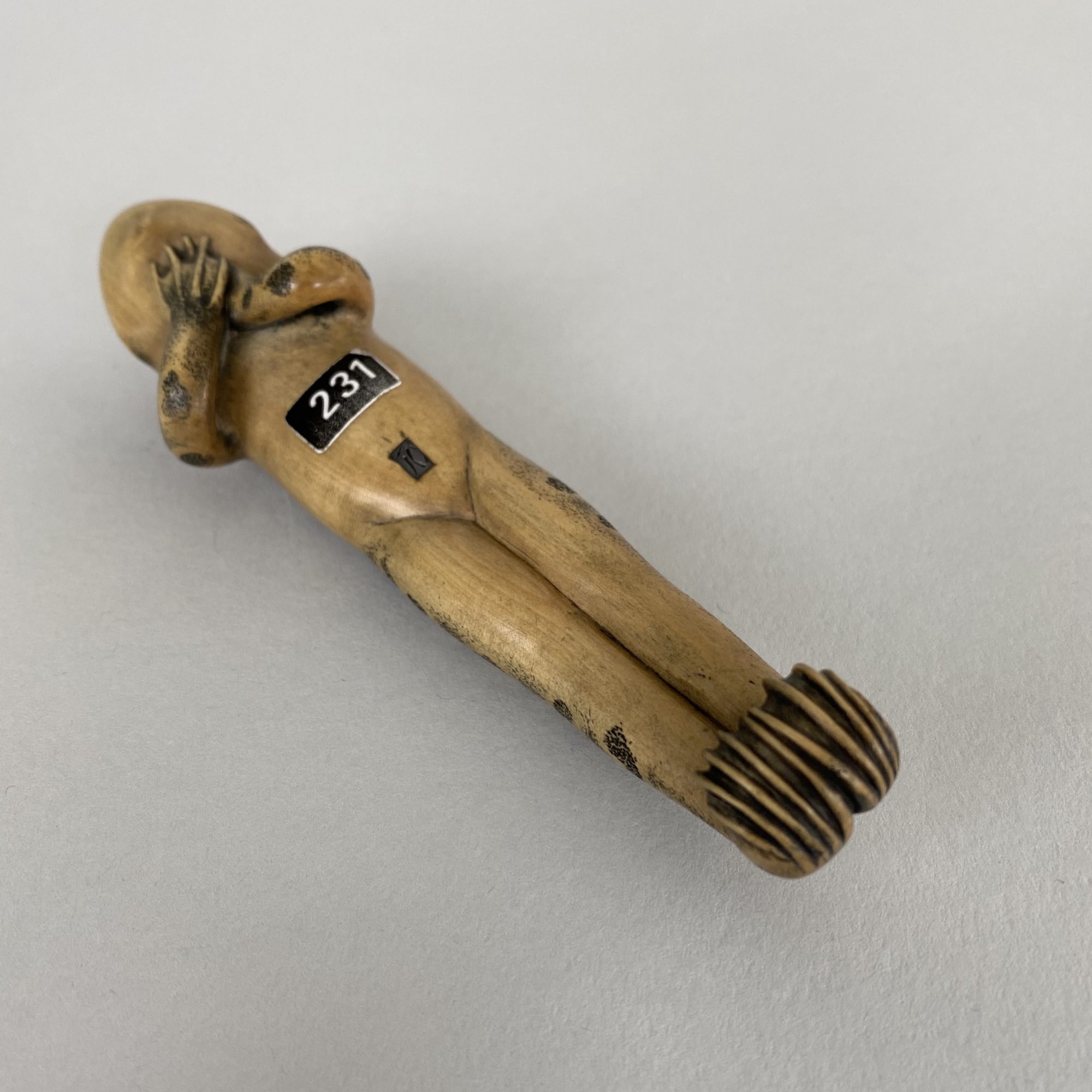 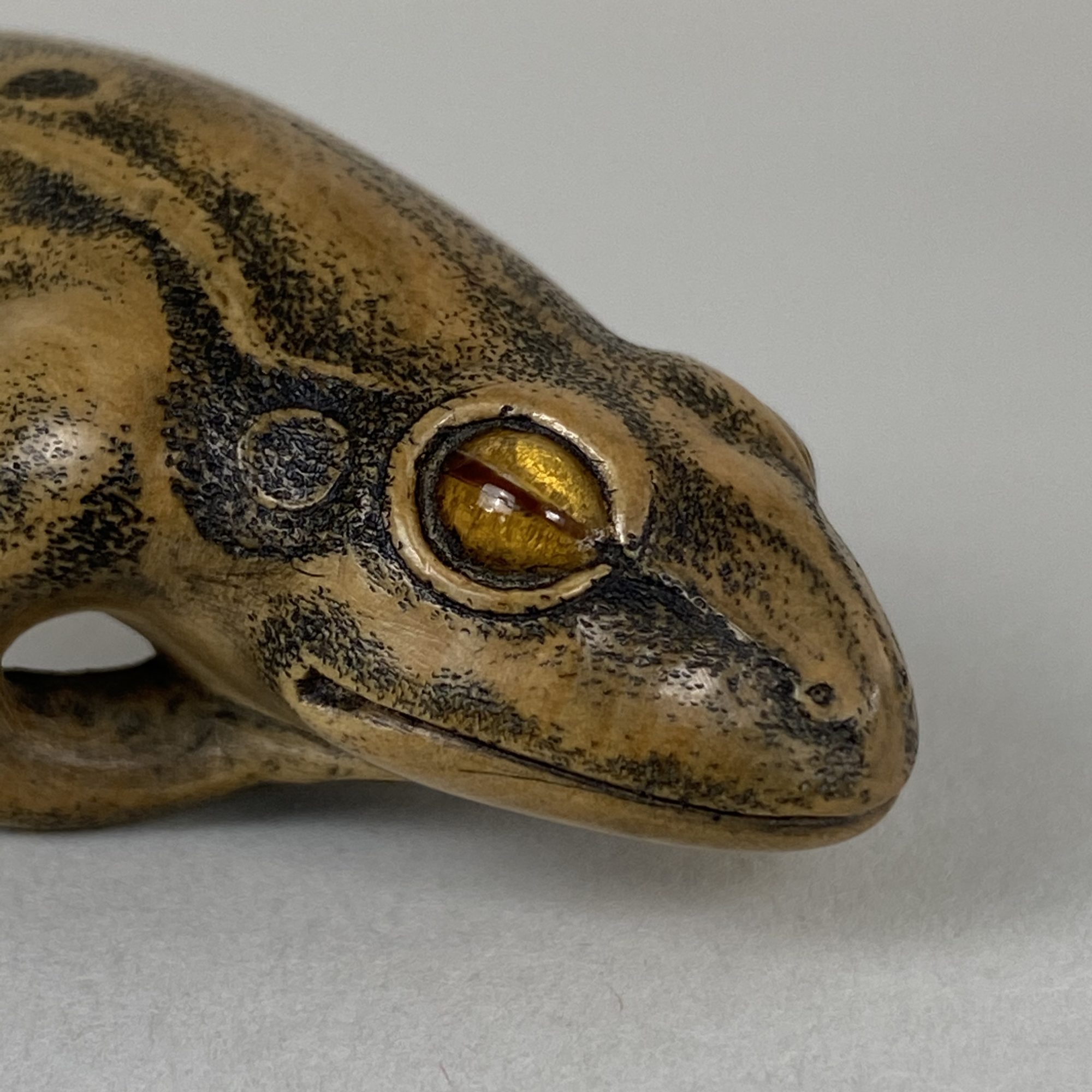 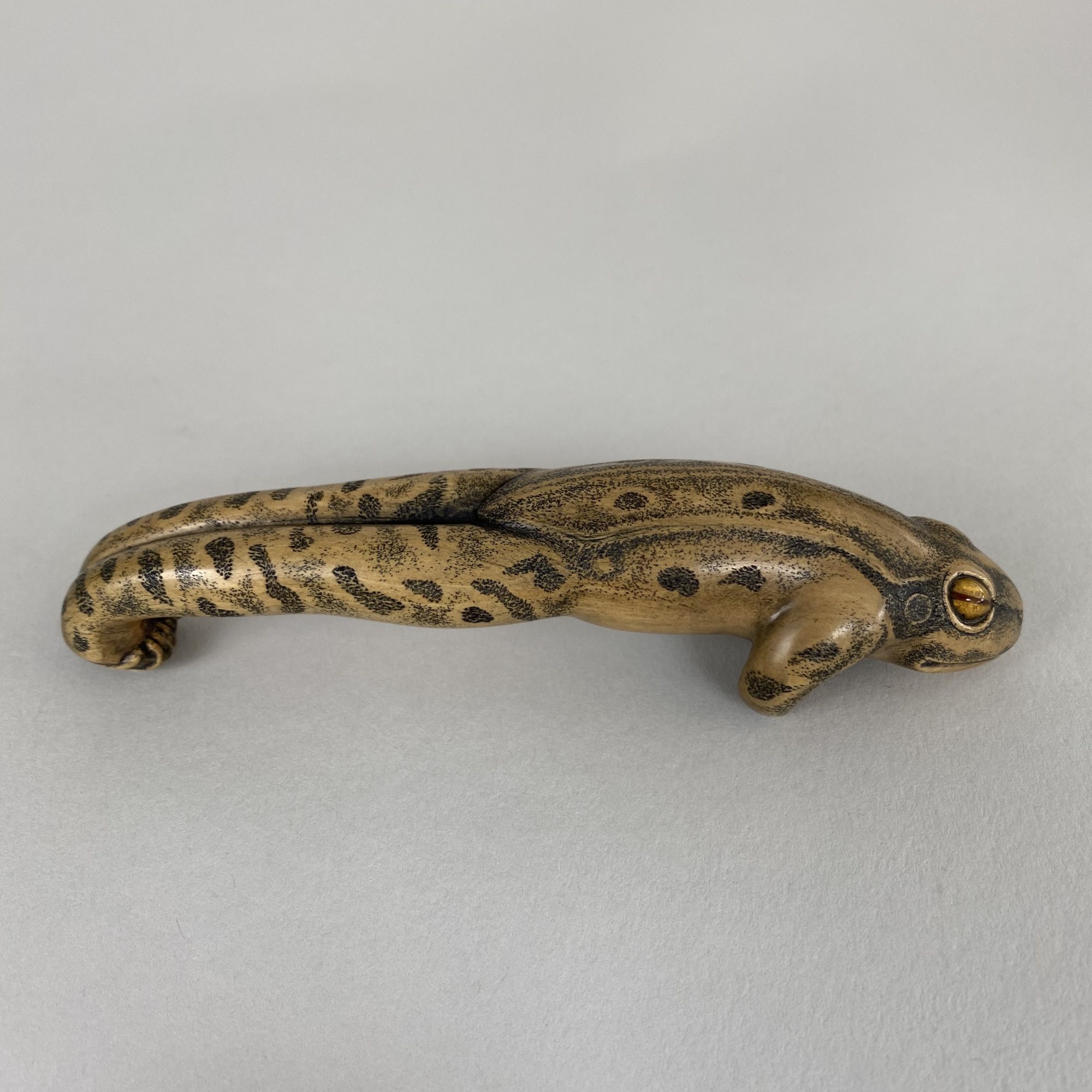 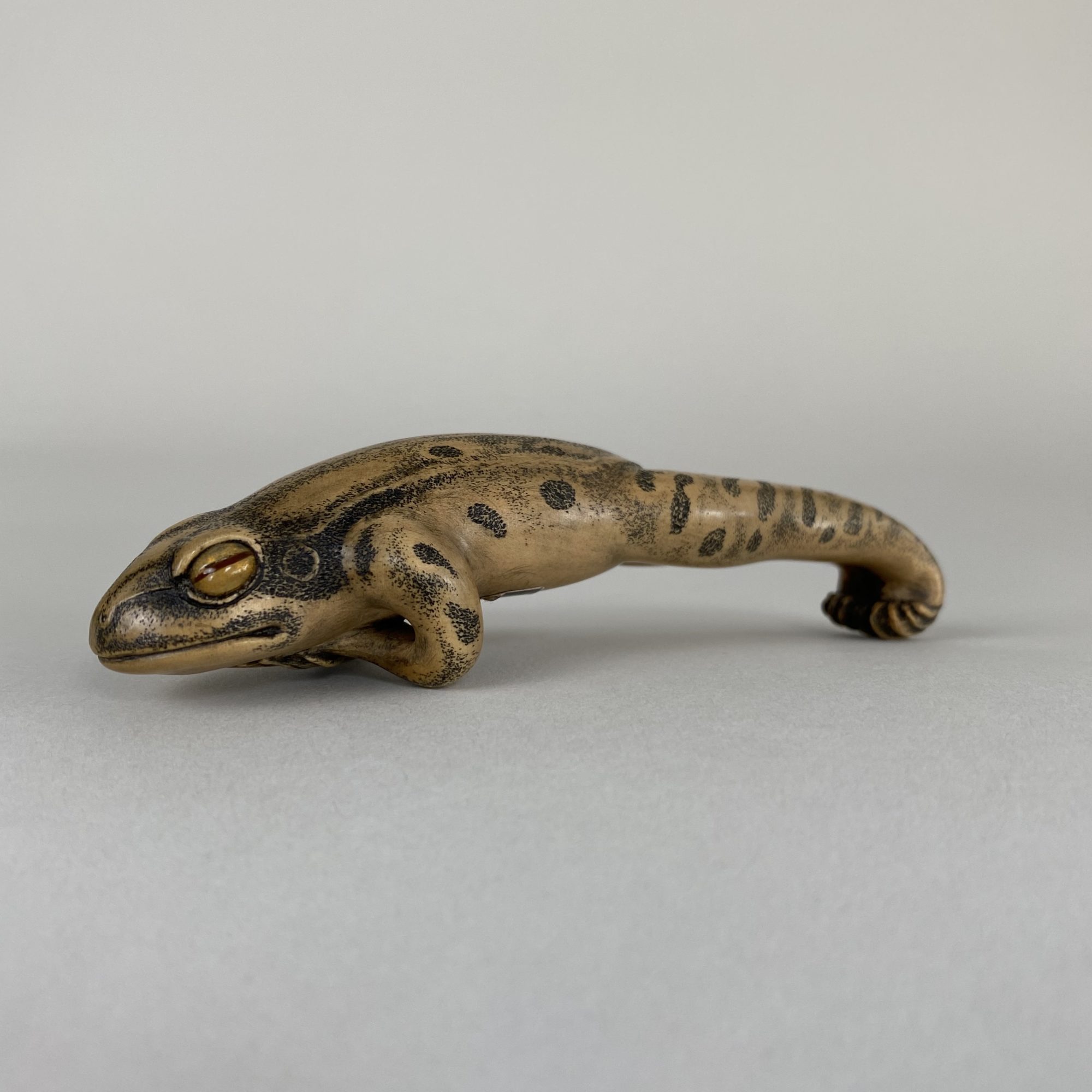 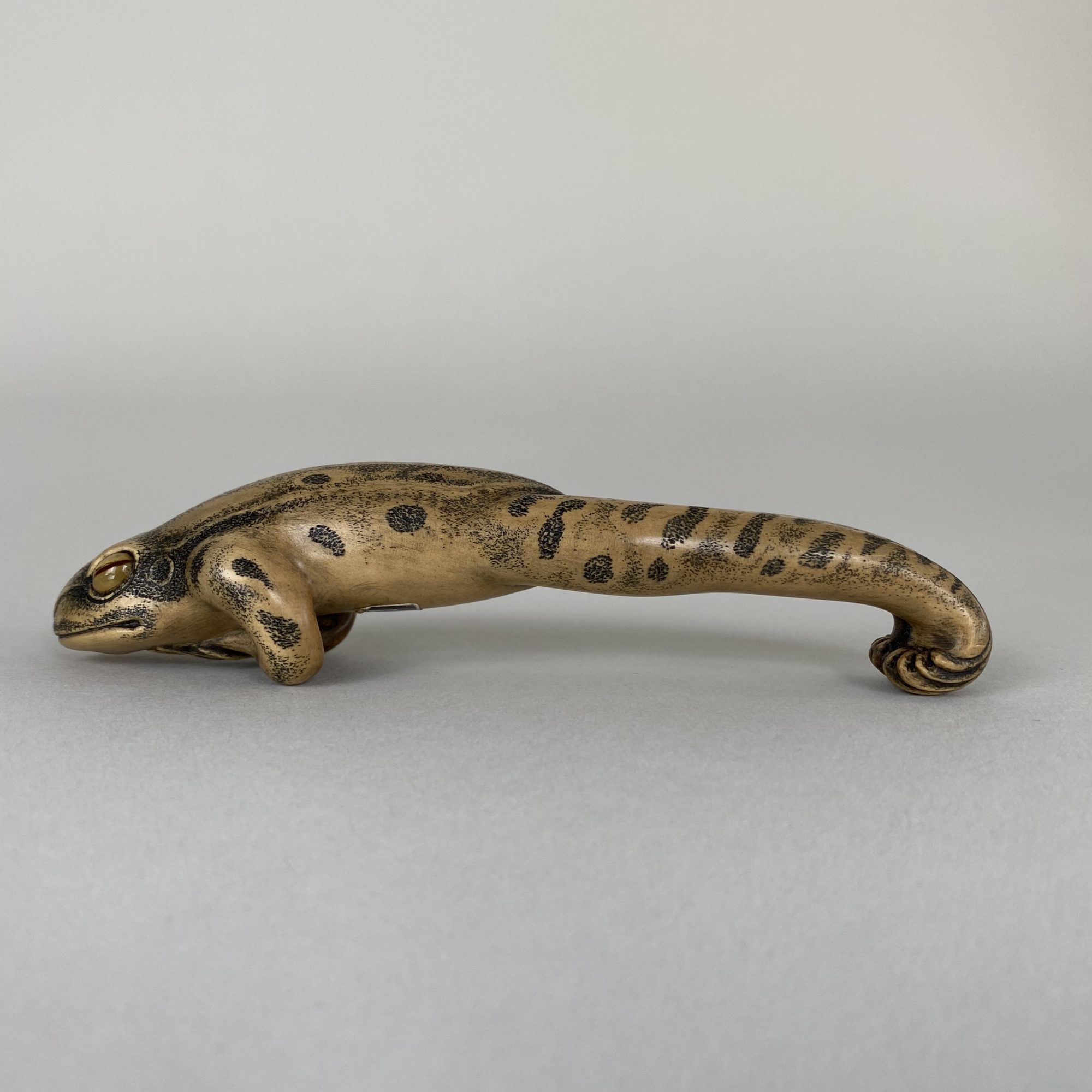 A modern (August 1993) boxwood netsuke of a realistic leaping frog with horn eyes.

Provenance – Artists notes on the netsuke are available.

Jack Coutu was an artist of diverse talents, known primarily for his prints, watercolours and sculptures. He lived in Farnham, Surrey and attended the Farnham School of Art (Now UCA) before later studying then teaching printmaking at Central school of Art (now central St Martins) he was influenced by oriental art and began to carve netsuke in 1968. His work is held in collections in the V&A, The Museum of Fine Arts Boston and the Arts Council England.

Frogs have an interesting history in the British Isles, in Medieval England they were believed to be witches familiars and a sign of the devil. There have also been many historic uses for them in medicine, it was said that rubbing a frog on a tooth would cure toothache, their ashes could stop bleeding and they would change colour when it was going to rain.
However from the artists notes he did not choose the frog as a subject due to it’s folkloric meaning, he was more interested in the form of the subject. It is common for modern western artists to depict animals of their home countries.

A netsuke is essentially a toggle, used to prevent an object (usually an inro) from slipping through the obi (kimono belt). A cord is passed through the himotoshi (two small holes on the netsuke or a natural hole formed by a leg or arm of the piece) the other end tied to a container containing money, herbs or tobacco. The cord is then passed through the obi with the netsuke resting above it and the container below.
Netsuke have evolved from being utilitarian objects to miniature sculptures of great beauty and craftsmanship. Subjects they depict wide ranging and are an important record of Japanese life and folklore.

The tradition of carving netsuke is still alive and well today, with many Japanese artists creating great works of art equal to the old masters. Netsuke are also a popular subject for western carvers who use the techniques to depict traditional Japanese subjects or carve miniatures inspired by their own culture and animals.