The stories behind the art: Introducing Hotei. (Affectionately known in the West as “The Laughing Buddha”)

With his friendly face, pot-belly and big sack full of gifts, we think that this time of year is a good time to introduce one of the most popular characters in Japanese mythology… 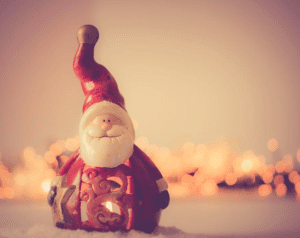 … Hotei! One of the 7 Lucky Gods and often lovingly known in the Western World as “The Laughing Buddha” 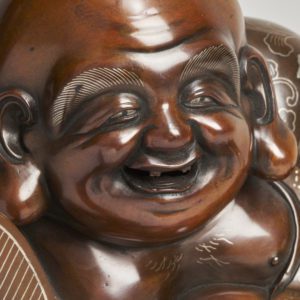 Hotei is one of the Japanese Seven Lucky Gods, (Shichi-fuku-jin.) Often portrayed as a cheerful, contented, portly monk, he is also affectionately known as The Laughing Buddha.

The legend of Hotei was inspired by a 9th Century Chinese Buddhist Monk called Budai or Budaishi. Just before Budai died at the beginning of the 10th Century, he declared that he was in fact “Maitreya”. Chinese Buddhists believed that Maitreya would be the future incarnation of Buddha and when he returned to the world he would bring salvation to millions.

This story of hope and salvation combined with his friendly disposition and larger-than-life features meant he would become a hugely popular Buddhist deity.

In Japan, Hotei became a symbol of happiness, luck, prosperity and generosity. He always carries with him a large linen bag which contains gifts of good fortune that he offers to the needy, infirm and to children.

He is also often depicted holding a fan which can be seen to represent authority and the ability to grant wishes. 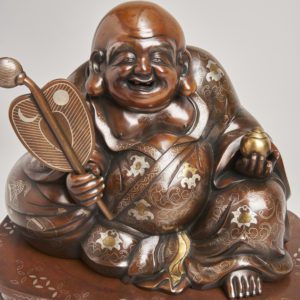 All these traits make Hotei very popular with the young and in Meiji-art in particular, he is often surrounded by happy, playful children. 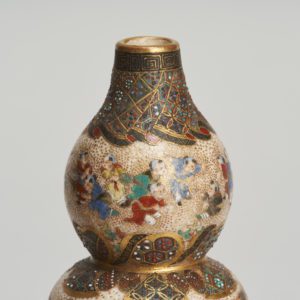 In more recent times, and because of his full belly and general air of contentment, Hotei has come to be referred to as the patron Saint of restauranteurs. 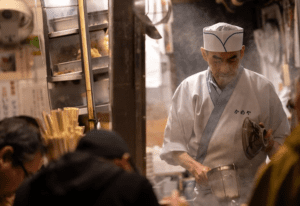 Hotei is also sometimes depicted on the Takarabune, the boat that transports the 7 Lucky Gods. 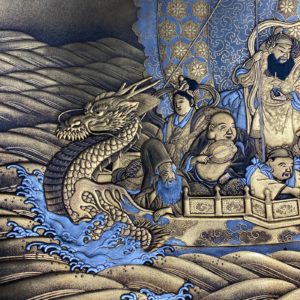 Click here if you would like to see more of this wonderful, large Bronze Okimono of Hotei. 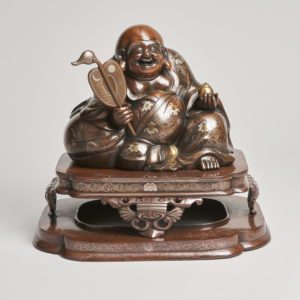 Thank you for reading. We will be back in the New Year with more Stories behind the art.